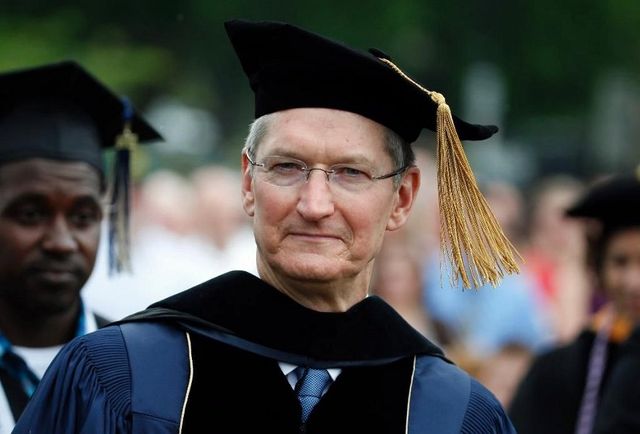 Tim Cook on Sunday spoke to the graduates of the George Washington University in the US capital. CEO stressed: Steve Jobs believed that one day Apple products will change the world. This represents a feasible long time, but now the goal to which Jobs was already achieved. The main idea of the speech Cook: “It’s a world that will change you.”

Cook drew the audience’s attention to the fact that the Apple iPhone camera helped to capture on video a thousand crimes:

“His [Steve Jobs] representation Apple was supposed to be a company that would be turned into powerful technology easy to use tools. They would help people realize their dreams and change the world for the better. Our products are doing amazing things, and Steve and represented, they empower people around the world. People who do not see, but who need someone to read the information, so they can not see the screen. People for whom technology is life, because they are isolated from society or have limited opportunities. People who witness injustice and want to punish the perpetrators. Now they can do it, because I always have a camera in your pocket. “

Cook also said that Jobs was the man for him, “make to question everything and those who turned all his ideas well.”

To somehow diversify its serious speech, Cook decided at the beginning of a little joke, releasing the “pin” to the phone, not created Apple: «Those of you who have the iPhone, turn the gadgets in silent mode. Those who have no iPhone, please put your smartphone into the center aisle. At Apple has a worldwide recycling program. ”

In his 20-minute speech included Cook and stories about his meetings with American politicians. George Wallace, the former governor of Alabama, and Jimmy Carter, the 39th president of the United States, Alabama were teenagers, reading history books, which fails to mention the role of slavery in the Civil War. He shared how I first met with Steve Jobs in the late 90s.

At the end of speech, Cook decided to talk about heroes like Dr. Martin Luther King Jr. and Robert F. Kennedy, pulled out his iPhone and took a picture of the graduates. “This is the best view in the world” – said the CEO of Apple.