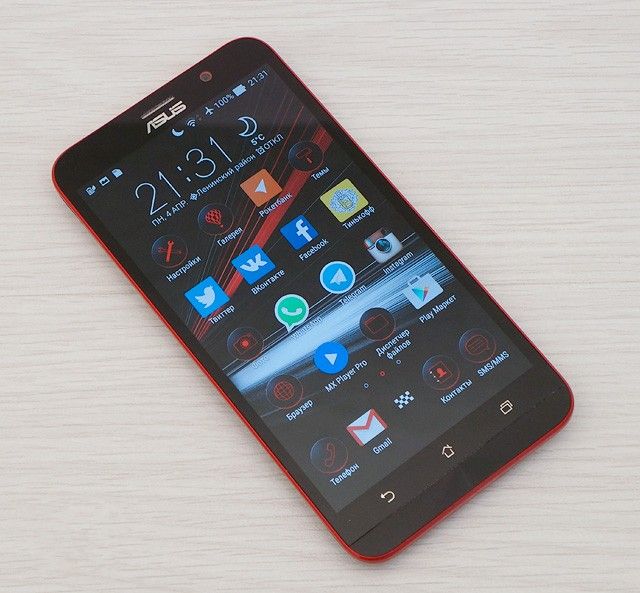 A premium version of the Asus ZenFone 2 Deluxe was very similar to the original model, so instead of the review I decided to tell about it under the rubric of “Ten Things”.

The smartphone comes in a nice black box with a characteristic bend, which I initially took to be a defect, even thought to myself: “who among observers managed to crumple it so?” Later it turned out that this design element in common with one of the rear covers, which included just two.

The original design of the ZenFone line goes back to the eponymous company laptops Zenbook. They repeated the ideas contained in the external “Zenbook” form, especially the beautiful rounded pattern on the bottom panel and the back cover.

But there the similarity ends in the design, because most ZenBook made of metal, and all ZenFone – plastic. This ZenBook usually thin and light, and ZenFone line, on the contrary, a little thicker and heavier than its competitors.

The key difference from the usual design Asus ZenFone 2 Deluxe version is in the back cover. Included with the unit are just two beautiful changeable covers, and has the same name ZenUI threads under the covers. By the way, about the theme, in my opinion, they are made is not very good, because the third-party application icons will not redrawn, as a result of a mixture of two different designs, which is not very good. 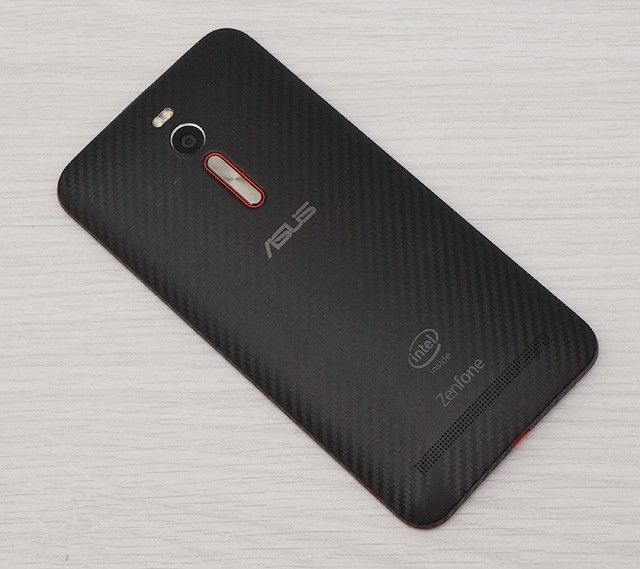 I do not really like the size of the original ZenFone 2, as it was a very massive: the thick, tall and heavy. Perhaps someone like that, I prefer the more compact dimensions. Unfortunately, this parameter Asus ZenFone 2 Deluxe is no different from its prototype.

The ZenFone 2 has decided to move the volume rocker on the back cover, which, in my opinion, is a bad decision. It is clear that Asus assembled it from the LG, but in their G-series, this approach is justified, because the same G2 was just a very thin at the edges, so the rocker and moved. A plump ZenFone 2 makes no sense to have these buttons on the rear panel.

The power button in one of the original Zenfone 2 models worked very badly and tightly pressed. Fortunately, it was a simple marriage, so in the same Asus ZenFone 2 Deluxe her no complaints except the location on the top. On the other hand, the screen can be turned on and off by double tapom, so it’s not much of a problem.

Separately, I would like to discuss a touch-screen button. I find this control is very inconvenient onscreen buttons more practical: they would reduce the overall height of the device and would simply hiding when viewing videos or playing games. In addition, the touch buttons are no backlight, so use the device at night or late in the evening it becomes more inconvenient. 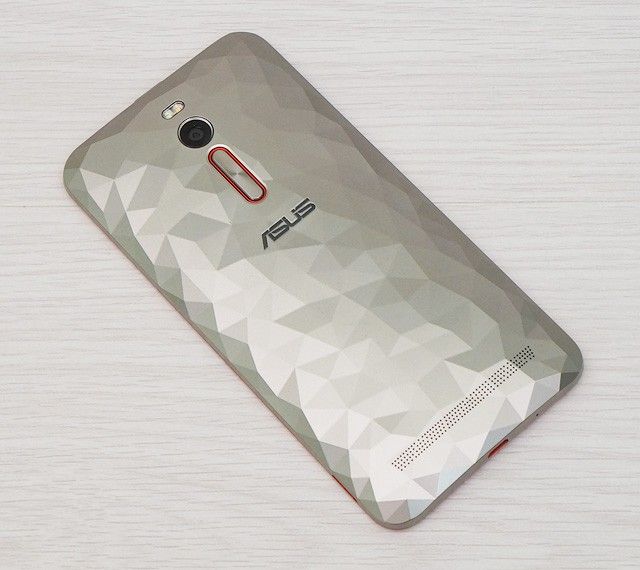 To be honest, from the Asus ZenFone 2 Deluxe version expect higher resolution, QHD, for example, but Asus we decided to leave the same as in the original ZenFone 2 screen. It’s hard to say, plus or minus. On the one hand, QHD – a big load on the system and, consequently, a decrease in operation time, and on the other – a clearer picture (however, notice the difference, not all users).

The display itself is frankly mediocre. He has a natural color rendition, but greatly disappoint range in brightness. In sunny weather, it would be desirable to unscrew it stronger, and the slider is already at the maximum. Perhaps the claim to the brightness is the most important, because on the part of the viewing angle, picture clarity, and other parameters of the screen, in general, good. By the way, under artificial lighting lacks brightness Asus ZenFone 2 Deluxe with a margin.

I really like the fact that Asus do with Android, yet since their PadFone and Transformer Pad lineup. They gently change the system and add new functionality to it, while, in contrast from Samsung, there is no complete shoveling design from scratch.

This ZenUI develops, for example, before using the keyboard were visible mikrozaderzhki now they are missing. The launcher had a separate mode, when all applications are available on the desktop, plus you can change the grid size as on the tables and in the application menu. In ZenUI a lot of settings, with each component of the shell is updated via the Play Store, so we can not wait for the new version of the firmware, simply download the update for a specific application. This modularity allows you to be less dependent on the version of the operating system. By the way, the device is running Android 5.0 running. Someone may upset, I used the device without any problems. 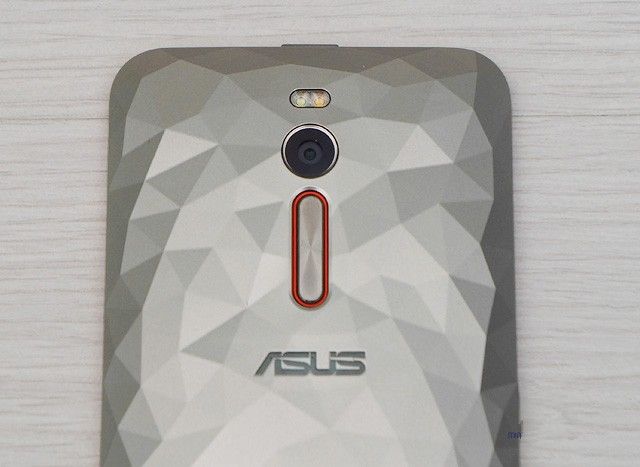 The key difference between Asus ZenFone 2 Deluxe-version of the original ZenFone 2 – and the amount of internal memory. The Asus suggests 256 GB of internal memory and 4 GB of RAM, but a little cunning. After all, in fact the internal storage capacity of 128 GB and even 128 GB provides the included memory card.

To be honest, I can faintly imagine what might need such a huge amount of memory on the mobile device, but are willing, it suffices to recall that some buy iPhone 6 / 6s at 128 GB.

The original ZenFone 2 was the first smartphone to support QuickCharge, which I tested. I must say that it very quickly get used to. Of course, Asus ZenFone 2 Deluxe is also very fast charge: 40% for half an hour and all for 96 minutes. Below – the battery life results in our standard tests. 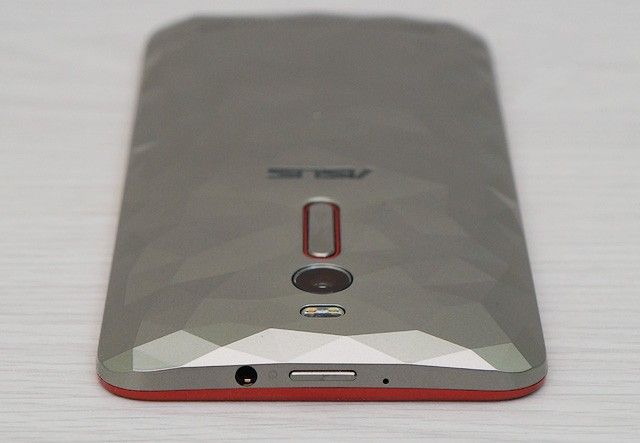 The camera module is then exactly the same, so let me quote a comment by Roman White from the review of the original ZenFone 2:

Positive aspects of the camera:

I’d add that I like a large number of camera settings, there are also some presets for Self, and blurring the background, and night mode, and super resolution mode (although I do not particularly like the way it works).

In the retail Asus ZenFone 2 and ZenFone 2 Deluxe sells for 43,000 rubles. The Asus official online store is now undergoing the action, and as a gift to your phone, you get an external battery ZenPower.

Recall that the original ZenFone 2 FHD-resolution, 4 GB of RAM and 32 GB of internal memory is now sold in 21 000 rubles, and for the money it is a very good option. What is the sum value of Asus ZenFone 2 Deluxe -version?

Firstly, the amount of internal memory, and secondly, the included memory card to 128 GB, and third, an updated version of the chipset from Intel, the fourth – two removable panels included. Also let’s not forget that all sorts of Special and Limited Edition have an additional mark-up “on exclusivity.” Such things do not usually buy their own, and take as a gift. Of course, the key advantage of Asus ZenFone 2 Deluxe – its huge memory capacity, while it is much cheaper than the iPhone 6s Plus 128 GB. If you do not need 256 GB of internal memory, you can always save 20 000 and take the original ZenFone 2, which is still relevant and profitable proposition.

As for the Asus ZenFone 2 Deluxe -version, I expected to see in her metal housing and improved display and better camera, but Asus decided to simply increase the amount of memory that, in general, is also an option, given that not far off release of the new Asus ZenFone 3, which is still likely to be.