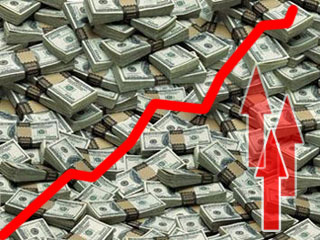 So, figure on Tuesday rose to the level of 2.64%, the maximum level since May 12. Sales began after the Ministry of Finance held an auction on placement of three-year securities in the amount of $ 28 billion, which is, incidentally, is only part of the planned this week placement. Total securities will be offered for $ 62 billion

Elapsed occupancy partially had a negative impact on the market, as has absorbed the liquidity. Also, it is possible that investors are beginning to remember that the Fed is close to the time when quantitative easing ends and the federal funds rate will be raised.

Auction 3-year notes at a yield was 0.93%, and after that they have traded at a yield of 0.89%, although mostly bonds with all maturities traded with a yield close to the high of the day.

Demand at the auction oversubscribed 3.41 times, slightly above the average of 3.37 times. Foreign central banks bought 26.5% of the issue.

Recall that U.S. bonds in the last two months show a dramatic decrease in bonds to investors doubt background in economic growth. Many bidders who put on yield growth, were in trouble and had to immediately close their position that only accelerated the decline in yields.

Many strategists believe that soon the main factors for the market will again be further Fed policy and the economy.

For example, if inflation begins to accelerate, and the labor market recovery will continue, it is highly likely to put pressure on the value of the bonds. Just over a year ago, when the Fed first started talking about plans folding QE, the market reacted complete decline. Now there is no element of surprise, but understanding that the Fed will soon can actually move to tighten policy can play a role.