Company WD, a division of Western Digital, officially unveiled the world’s first portable two-drive system in which power is provided via an interface Thunderbolt. The range of novelty manufacturer received the designation My Passport Pro.

Drive is available in two versions of 2 and 4 TB. He filled in an aluminum housing and includes two HDD size 2.5 inches. Drive WD My Passport Pro supports RAID technology and is aimed at owners of the Mac.

According to the manufacturer, the drive My Passport Pro can provide the necessary level of performance for the most demanding applications without the need to connect the power adapter or additional cables. Declared support modes RAID 0 and RAID 1. Recommend first used where maximum performance is important, and the second – where high reliability is critical safety data. The maximum data rate for Drive My Passport Pro declared at 233 MB / s. 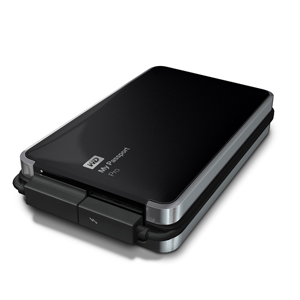