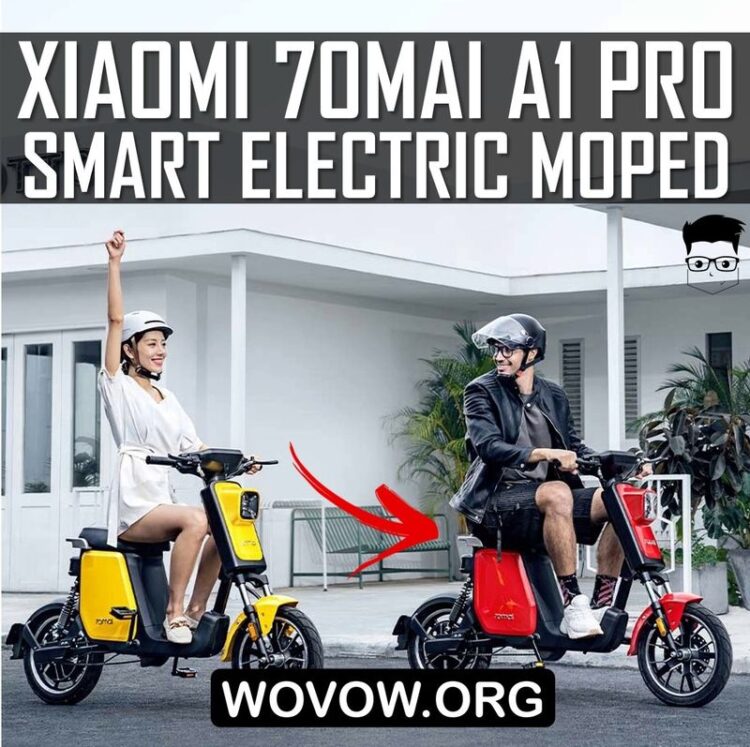 The market for electric transport is developing rapidly. While Tesla is squeezing out gasoline and diesel cars with its electric cars, electric scooters, bicycles and mopeds are replacing motorcycles and even public transport. Agree that it’s much more comfortable to get to work with an electric moped than a crowded bus or subway.

I want to note that it is a moped, not a bicycle, because it has no pedals.

Okay, let’s start our first review of Xiaomi 70mai A1 Pro with the design, and then talk about specifications and price.

Before starting the review, I want to say that the new Xiaomi electric moped just yesterday was introduced in China. Full information about 70mai A1 Pro is available at YouPin, but it is in Chinese. Unfortunately, I don’t understand Chinese, so I will deal with pictures and hieroglyphs with you.

As you can see from the pictures, the new 70mai A1 Pro electric moped looks compact but stylish. The adult male image above looks funny on this moped, don’t you think?

The electric moped is available in five colors.

There’s a big LED lantern in the front and red parking lights in the back.

By the way, Xiaomi 70mai A1 Pro is IPX6 waterproof, so you can ride in puddles or in the rain.

Please note that the maximum weight for which the moped is designed is 120 kg.

Perhaps the main feature of Xiaomi 70mai A1 Pro is the large 6.86 inch IPS display on the dashboard. It shows speed, distance, battery level, ride mode and other useful information.

By the way, it is not just a display, but a complete system. Inside there are 2 GB of RAM, 16 GB of built-in memory, 4G LTE, GPS. You can display a map with direction, music and video player. Moreover, the driver can even receive phone calls. Very interesting!

The electric moped 70mai A1 Pro has a built-in video recorder. It is 1080p camera with 123 degree viewing angle.

As for the technical specifications of the new moped, Xiaomi 70mai A1 Pro has a battery capacity of 48V20Ah. It provides an range of up to 70 km. It’s pretty good for riding within the city, isn’t it?

It has a maximum speed of 25km/h, which is not too much, but you don’t need more to ride around the city.

That’s all I learned from the Chinese characters about the new Xiaomi electric moped. To be honest, I am very impressed by Xiaomi 70mai A1 Pro. It is not just an electric moped, but a smart electric moped thanks to its built-in display with operating system. You can perform any function on the screen like on your smartphone, including phone calls, navigation, social media, etc.

The moped also offers an excellent range of up to 70 km for city trips.

I hope that Xiaomi 70mai A1 Pro will soon be available at Chinese online shops such as Aliexpress, GearBest, Banggood and others.