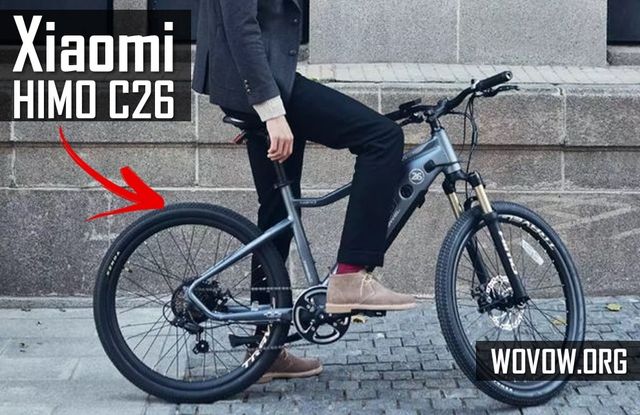 A couple of days ago, a new Xiaomi HIMO C26 electric bike appeared on Youpin platform. Its main feature is the range of up to 100 km, which is noticeably greater than most other electric bicycles.

Thanks to the durable metal frame and large wheels, Xiaomi HIMO C26 is suitable not only for city roads, but even off-road or mountain trails. HIMO C26 looks like the next bestseller on electric bike market!

In this article, we will make the first review of Xiaomi HIMO C26, as well as compare it with the previous popular Xiaomi electric bike – HIMO C20.

Let me remind you that Xiaomi HIMO C20 was introduced in March 2019, and it was a real discovery in the electric transport market.

The bike has a folding aluminum frame, 80 km of range and even a pump built into the seat. We already wrote a detailed article about Xiaomi HIMO C20, and you can read it on our website Wovow.org.

Let’s start our review with design, and later look at specifications, battery and price.

HIMO C26 electric bike is bigger and heavier than HIMO C20. This is not surprising, because, as we wrote earlier, the new bike is designed not only to ride around the city, but also off-road, for example, in the mountains.

The new Xiaomi bike is equipped with a light frame and 26-inch wheels.

Unlike HIMO C20, the new HIMO C26 bike has a triangular frame, which makes it more durable and stable on a bad road.

Xiaomi HIMO C26 case is made of metal. The bike comes in three colors: gray, white and red.

HIMO C26 does not fold, so it needs more space to store or transport it than for HIMO C20. On the other hand, you can adjust the height of the seat.

A large white light with a power 45 LUX is located above the front wheel. Behind under the seat is another red light.

Thanks to its powerful front and rear lights, Xiaomi HIMO C26 is a safe bike both day and night.

Both electric bicycles accelerate to 25 km per hour. They are designed for a maximum weight of 100 kg. As you understand, both teenagers and adults can use bicycles.

It is important to remember that the weight of these bicycles is 22 kg and 25 kg. The new HIMO C26 bike is heavier.

Like HIMO C20, the new HIMO C26 has a small steering wheel display. It is located on the left handle. This is a small monochrome screen that displays speed, distance, battery level and riding mode.

To the left of the display are the control buttons. They allow you to turn on and off the light, change the riding mode and speed.

By the way, the display has protection against water and dust according to IPX7 standard.

On both sides of the steering wheel are the front and rear brake levers.

Xiaomi HIMO C26 has three riding modes: mechanical, hybrid and fully electric. By the way, in fully electric mode, an electric bike can ride up to 60 km.

As for the braking distance, on a dry road it is 4 meters, on a wet – 6 meters. Xiaomi HIMO C20 shows the same results.

Whether there is motor and battery protection from water on a new electric bike is still unknown. Now we only know about IPX7 display protection.

Although we think it would be strange to create an electric bike for riding around the city and off-road without protection from dust and water. We are sure Xiaomi HIMO C26 is equipped with dust and water protection. But for now, these are just our guesses. We look forward to more information about the new bike.

Xiaomi HIMO C26 and HIMO C20 are already available for sale. We think you will be surprised of their prices.

As our first review of Xiaomi HIMO C26 and its comparison with Xiaomi HIMO C20 showed, the new e-bike received several noticeable differences.

HIMO C26 boasts a range of up to 100 km on a single charge, a triangular frame, large 26-inch wheels and the ability to ride on mountain trails and off-road.

The disadvantages include the large size, weight and awkward design. In any case, $580 is very affordable price for electric bike.