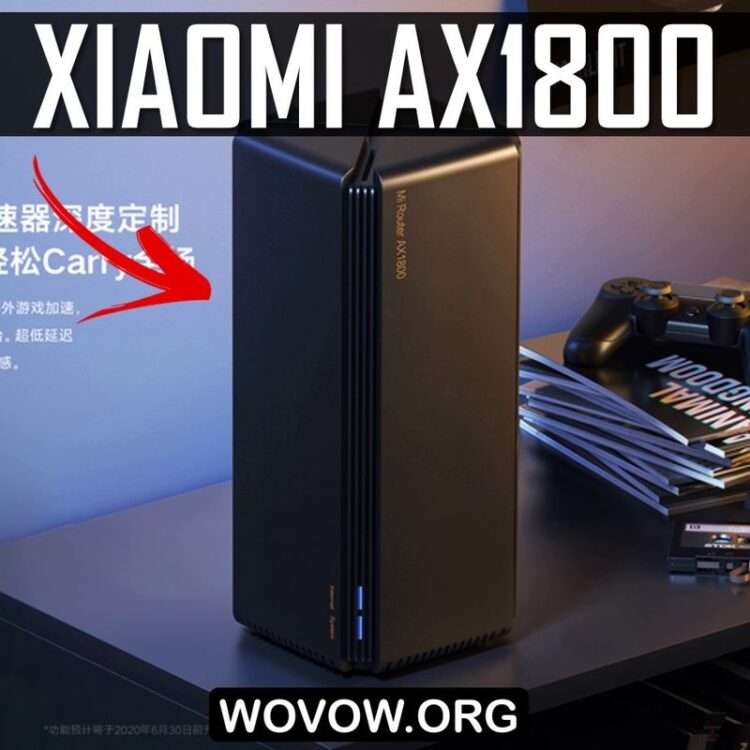 Xiaomi introduced its new router called Xiaomi AX1800. It is the second router of the Chinese company with Wi-Fi 6 supports. Moreover, it is probably the cheapest Wi-Fi 6 router on the market. Its price is only $46 in China.

By the way, the new Xiaomi AX1800 router has a full name of Xiaomi Mi Router AX1800. Just to clarify, so you do not think that these are different devices.

Okay, let’s do the first review of Xiaomi Mi Router AX1800 and talk about its main features.

The new Xiaomi AX1800 router has an unusual design. The router is shaped like an elongated square. If you remember the school program, the shape is called a parallelepiped.

In fact, this is not the first Xiaomi router with an unusual design. Recently I did a full review of Xiaomi AC2100 router which has a shape of cylinder.

As you can see, Xiaomi Mi Router AX1800 has no external antennas, unlike most other modern routers. Most likely, they are located in corners, where the LEDs are located. The manufacturer focuses on these places on the official images.

On one side of the router, there is a power button, reset button, one WAN and three LAN ports.

In fact, except for the square shape, the appearance of the new router is almost the same as Xiaomi AC2100, including the location of light indicators, buttons and ports.

However, the new Xiaomi router is very different in hardware. Let’s talk about the specifications of Xiaomi AX1800.

Xiaomi Mi Router AX1800 is advertised as a business router because it has a powerful Qualcomm processor. The processor consists of four A53 cores with 1.2 GHz clock speed and 1.5 GHz NPU for the highest processing speed.

Together with the powerful Qualcomm processor, the router comes with 256MB of memory. This memory is enough for the new Xiaomi router to support up to 128 different devices simultaneously.

Unlike the same Xiaomi AC2100, the new Xiaomi Mi Router AX1800 has a maximum speed of 1775 Mbps. This is made possible thanks to support for Wi-Fi 6. The new Wi-Fi version is capable of combining 2.4 GHz and 5 GHz bands, thus offering 52% faster speeds than a standard router.

In addition, Xiaomi AX1800 has Mesh support. As you may know, Mesh system is multiple routers that are connected to each other and together offer more coverage than each individual router. Thus, using a Mesh system, you can cover a large office or home with Wi-Fi.

Of course, the new Xiaomi router supports OFDMA. It is a multiplexing technology that is capable of transmitting multiple signals in one. In addition, there is support for MU-MIMO, which allows you to transmit information to multiple devices simultaneously over independent channels.

By the way, you can control Xiaomi Mi Router AX1800 through an application on your smartphone or control panel in a browser on your computer or laptop. However, this is not a new feature, because control from a smartphone is available on Xiaomi AC2100 router and others.

The router is presented in China, and for now will sell only in China. The previous Xiaomi AC2100 Mi Router was introduced more than 6 months ago, and it has not gone on sale on the international market yet. I think we should not wait for the global version of Xiaomi AX1800.

If you like the new Xiaomi Wi-Fi 6 router, buy it from Aliexpress, GearBest, Banggood or other Chinese stores.