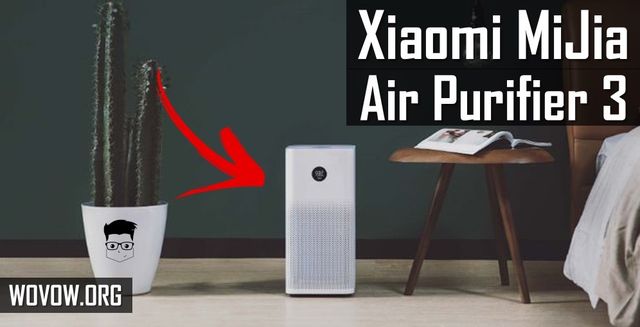 On August 9, Xiaomi announced the release of its new home appliance called Xiaomi Mijia Air Purifier 3. It is an updated and improved air purifier. It should be noted that this is the third generation of Xiaomi air purifier. The first generation was introduced back in 2014.

The new Xiaomi MiJia Air Purifier 3 has a power of 38 watts, several air purification modes and OLED display for control.

If we talk about efficiency, the new air purifier is able to clean 6660 liters of air per minute on an area of ​​up to 48 square meters. It’s even hard for me to imagine!

So, let’s start our first review of the updated Xiaomi MiJia Air Purifier 3. 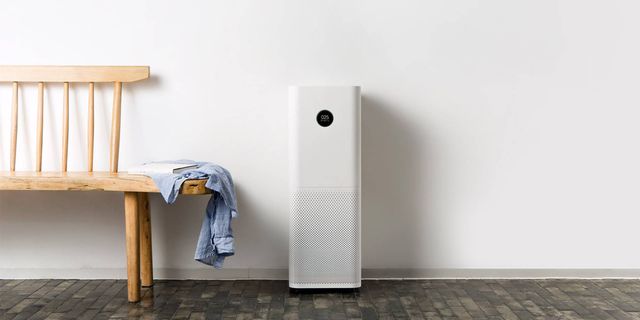 The appearance of the new air purifier has not changed much from the previous generation. It has the same rectangular shape. The body is made of durable white plastic.

We want to note that this is not a compact device, because its dimensions are 52 x 24 x 24 cm and its weight is 6 kg.

Most of the case is occupied by openings through which air is drawn for cleaning.

On the top panel there is a fan that blows purified air into the room.

The power button has moved from the top panel to the front. This is one of the most notable updates in Xiaomi MiJia Air Purifier 3 air purifier.

A round OLED display also appeared on the front panel, which displays the temperature, humidity and Wi-Fi connection. 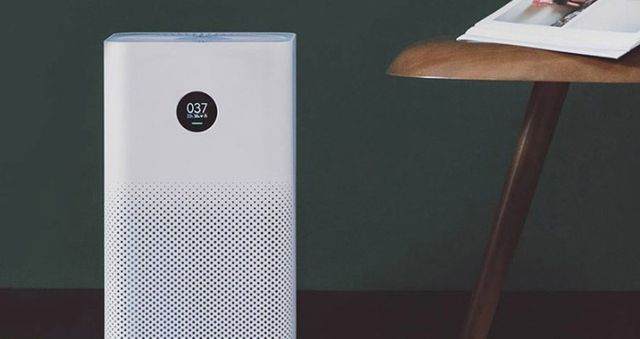 The control buttons for changing modes are located on the screen. The screen has an LED ring around it. Its color changes depending on the indoor air quality: from green to orange and red.

Now all the control buttons and information about air purifier are located in one place and are displayed on OLED display. 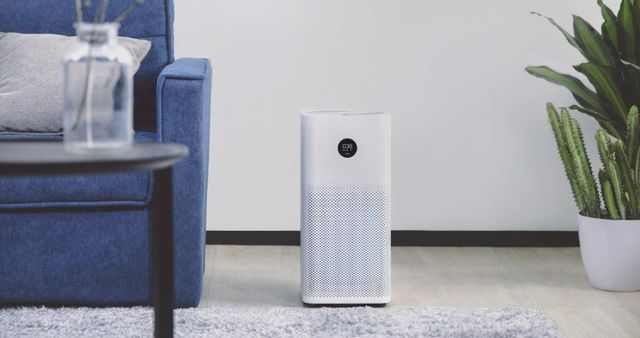 On the back is a removable cover. Behind it is a compartment with a filter. As you understand, you need to change the filter from time to time.

There is only a small charging connector at the bottom. The air purifier stands on small rubberized legs. It prevents from slipping and do not scratch the surface. 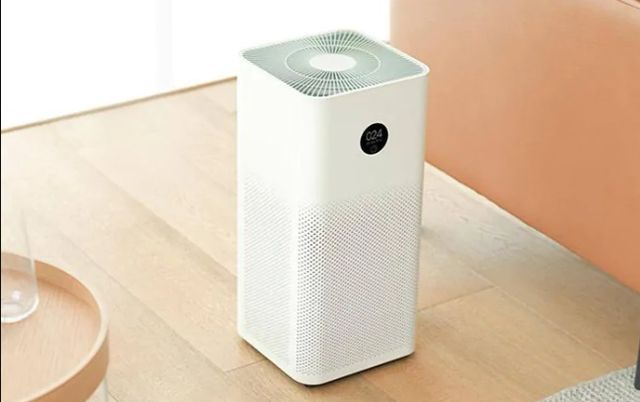 Xiaomi MiJia Air Purifier 3 looks pretty simple and stylish. It can become not only useful, but also a stylish detail of your room. 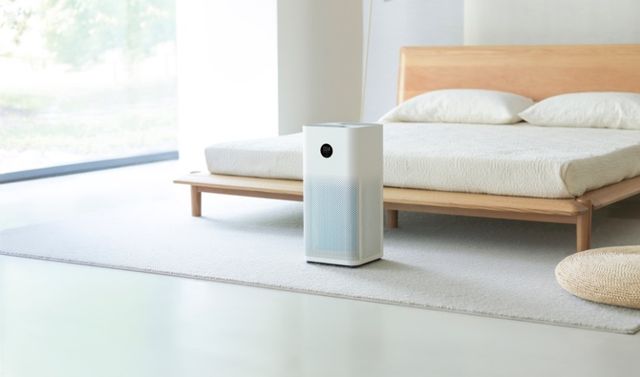 The main improvements in Mijia Air Purifier 3 compared to the previous version are not in design, but in its functions.

Xiaomi MiJia Air Purifier 3 can purify indoor air with amazing speed of 400 m³/h. It is able to clean 6660 liters of air in a minute.

The distribution area of ​​purified air increased to 37-48 square meters, depending on the mode. Filtration improved by 29 percent. Now, Xiaomi MiJia Air Purifier 3 Air Purifier is a good option for large rooms or offices. 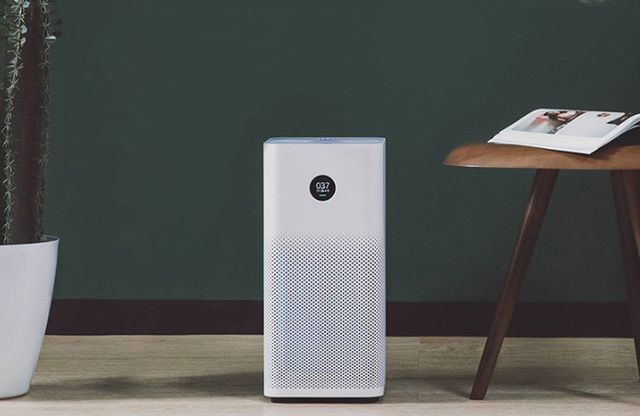 If we talk about power, it is 38 watts. At the same time, the noise from MiJia Air Purifier 3 did not increase. The maximum noise level is 32.1 dB. You can relax, sleep or read a book while the new Xiaomi air purifier is working. 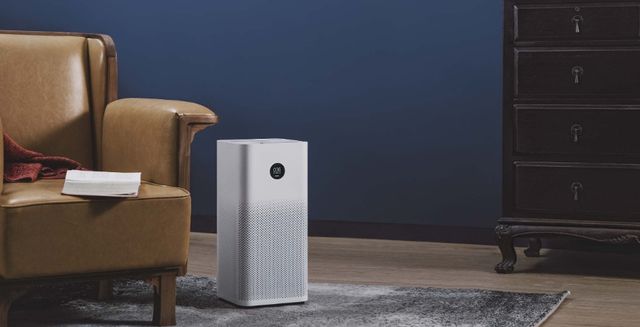 Thanks to the openings on all four panels, the air purifier collects dirty air from all angles of the room and cleans it. The fan blows air from above, after which clean air drops down, raises the dust again, and the cleaner draws in dirty air for further cleaning. The room is cleaned quickly and efficiently.

Air purification occurs through three filters: HEPA filter, plastic filter element and activated carbon filter. Each of them collects a certain type of pollution and dust. They collect not only dust and wool, but also such small particles as formaldehydes. 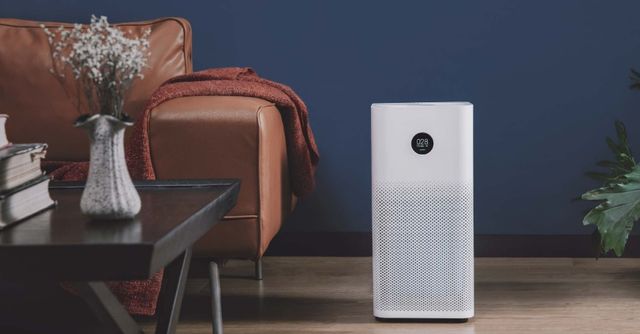 As we wrote earlier, LED ring around OLED screen changes color depending on the air quality in the room.

If there are less than 75 µg/m3 of pollution, then the ring is green. This is a good result.

If the number of particles is up to 150 μg/m3, then the ring changes color to orange. This is a moderate degree of pollution.

When the level of pollution is more than 150 μg/m3, the ring turns red. This indicates serious air pollution.

By the way, the level of air pollution is measured using the laser built into the air purifier. It is able to see particles 0.3 microns in diameter.

Of course, you can connect Xiaomi MiJia Air Purifier 3 air purifier to your smartphone, and control it not only using the buttons on OLED screen, but also through a mobile device.

To connect the air purifier to a smartphone, you need to download a special application called Mijia. All important information, for example, the state of the filter, will be displayed in app on smartphone. 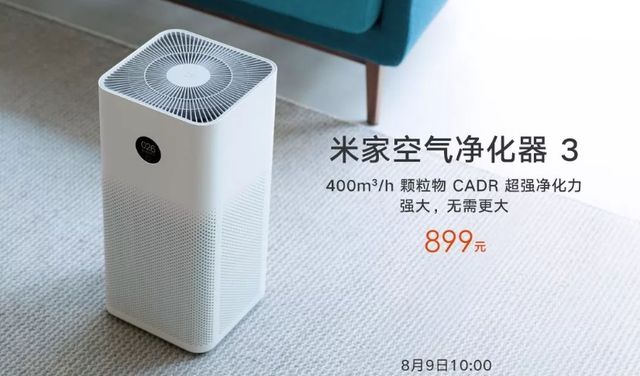 Xiaomi MiJia Air Purifier 3 air purifier is not yet on sale. On August 16, it will be officially unveiled in China, and it can be bought at popular online stores. The price is $127.