Xiaomi Redmi 8 REVIEW: Whether or NOT to Buy – That is The Question! 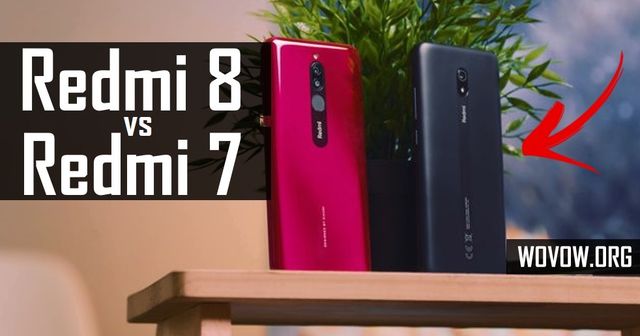 About year ago Xiaomi has started to release the smartphones under the separate brand. Many people thought that smartphone will lose in quality. However, Redmi brand became the smartphone leader in the budget market. The new Xiaomi Redmi 8 smartphone was introduced in early October.

Before the release of Redmi 8, company representatives conducted a survey among users: “How do they see a regular smartphone?”. Then they have listened to users, and released Xiaomi Redmi 8 – budget smartphone with an energy-efficient 12nm processor, large screen, stylish design, dual camera and 5000mAh battery. 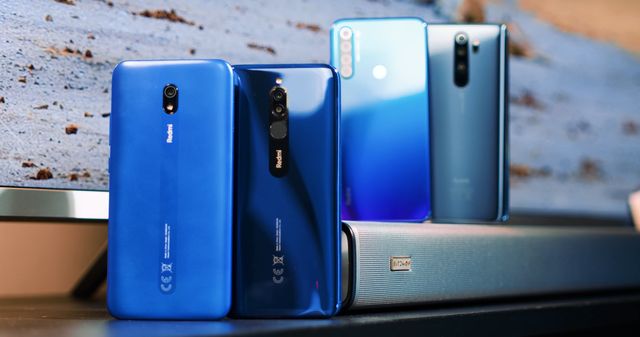 In the article you can find detailed technical specifications of Xiaomi Redmi 8, where to buy cheaper, as well as comparison with Redmi 7. 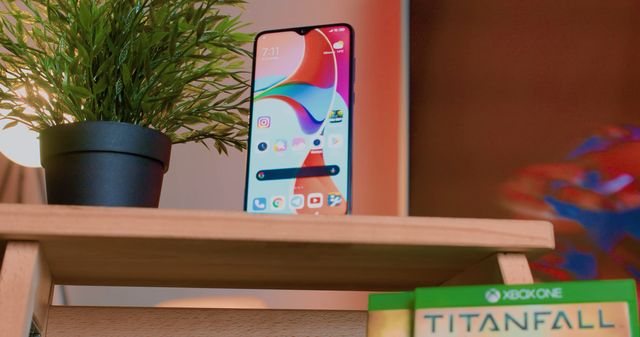 The budget smartphone segment is an incredibly competitive environment. Redmi series of smartphones has been the most successful in budget segment for several years in a row. What is the success? It’s hard to answer. If earlier only Xiaomi Redmi phones have Snapdragon processors, large batteries and good software, now almost any Chinese manufacturer offers the same features. Most likely, Xiaomi has a good reputation. The grade of the best budget phone manufacturer. 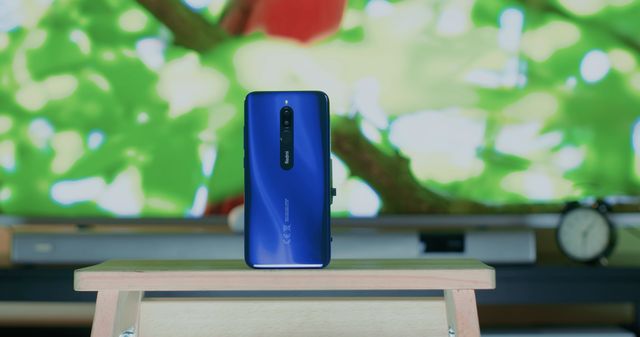 Finally, Redmi 8 was officially released, and we can talk about all its features. 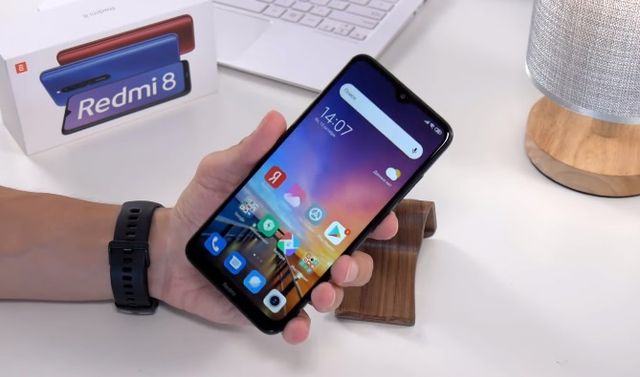 For the first time in a long time, smartphones from Redmi series have received a significant change in design. During the creation of budget smartphones, the manufacturer rarely invests in design. The Chinese company has more important problems: how to reduce the price of their another bestseller. However, Xiaomi Redmi 8 has another way.

The new design from Xiaomi has a special name – Aura Mirror. The design intent is to create a practical but vibrant appearance. 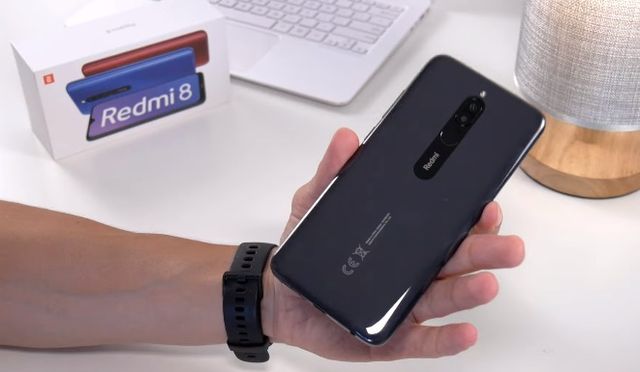 Xiaomi Redmi 8 received a stylish back cover. The figure resembles sea waves. The plastic back panel allows you to reduce the number of fingerprints left, and also improves grip with the smartphone. 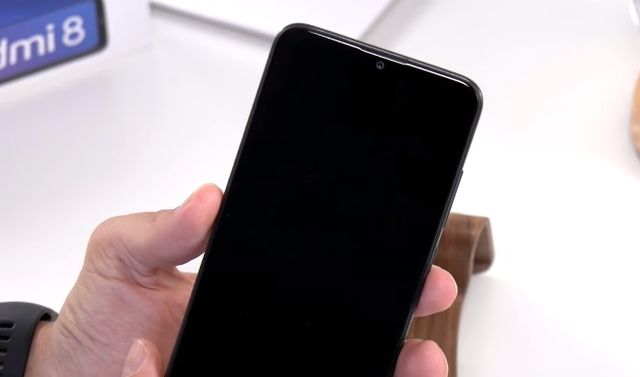 The highlight of the new Redmi 8 design is a decorative insert in the center of the back panel. This insert contains the main camera, LED flash, fingerprint reader and inscription “Redmi”.

The new smartphone also has P2i covering, which protects Xiaomi Redmi 8 phone from water splashes. However, you should understand that the phone does not have full protection against immersion in water. Therefore, we don’t advise you to bathe the new Redmi 8. 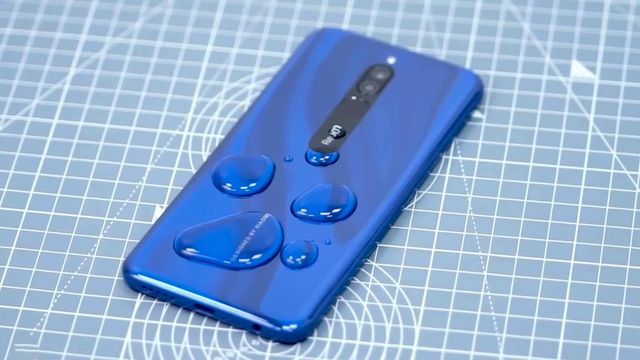 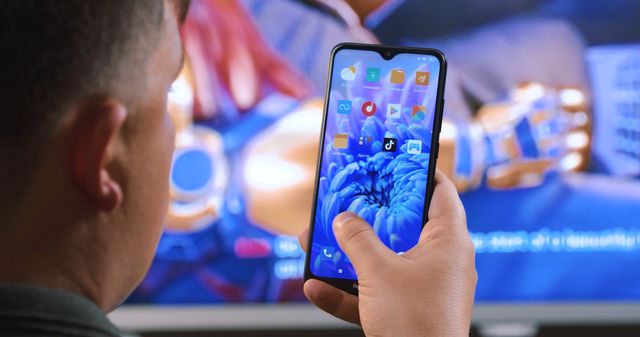 Redmi 8 display can easily compete with more expensive smartphones on the market. This is IPS panel with resolution of 1520 x 720 pixels, and protection of Gorilla Glass 5 generation. 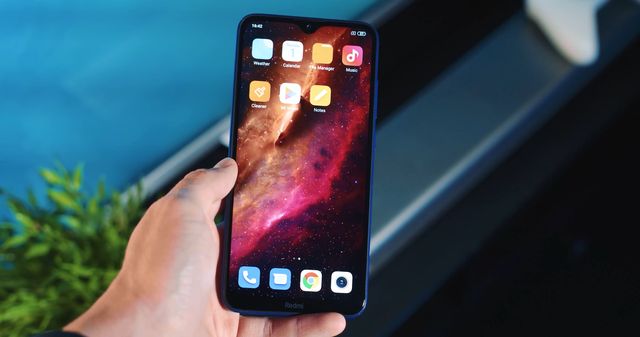 The waterdrop notch above the display has front camera and earpiece.

The image on the screen looks very good. It does not fade at angles. There is a decent margin of brightness, but it is a little weak in terms of clarity. 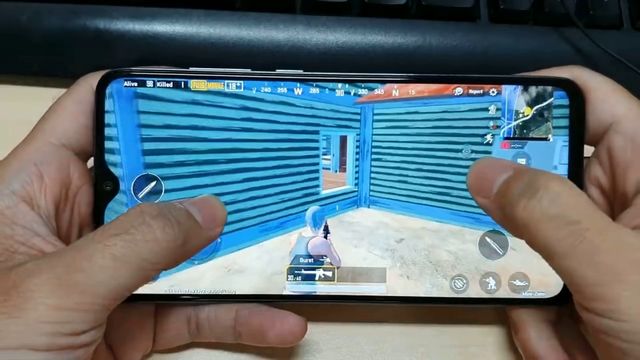 Snapdragon 439 processor caused a lot of questions among Xiaomi fans. As you remember, the previous generation of Redmi smartphone was powered by Snapdragon 632. It is more powerful, but less energy-efficient processor. 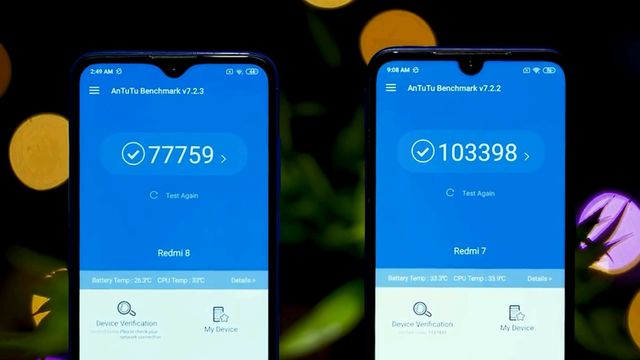 The head of Redmi – Lu Weibin – explained why they chose “worse” chipset. Firstly, they said that Snapdragon 439 is not bad. It has almost the same performance as Snapdragon 632. The difference in AnTuTu benchmark is only several thousand points. 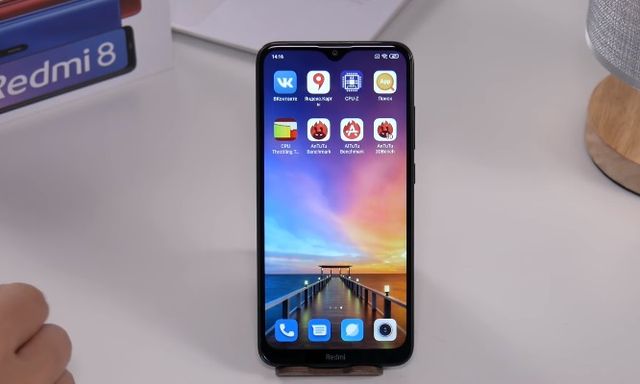 Secondly, Snapdragon 439 is built on 12-nanometer process technology, and not on 14-nanometer one, as its competitor. 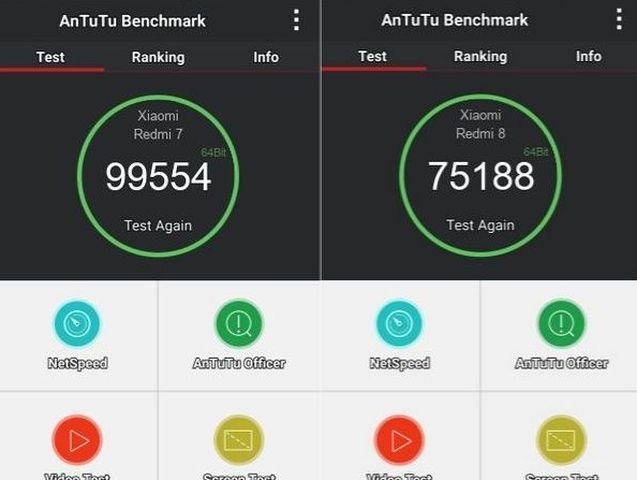 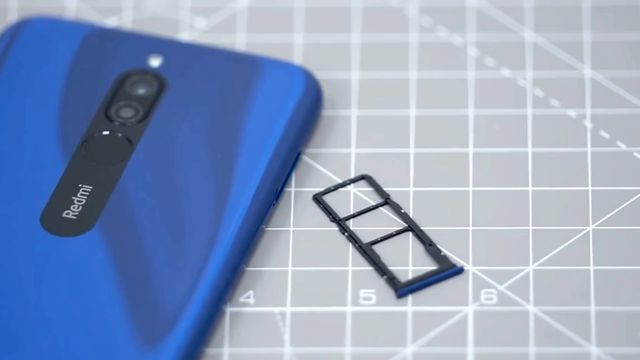 Xiaomi Redmi 8 scores about 80.000 points in AnTuTu. This is a good result for the budget smartphone. It copes well with multitasking and heavy games, such as PUBG Mobile and Call Of Duty Mobile 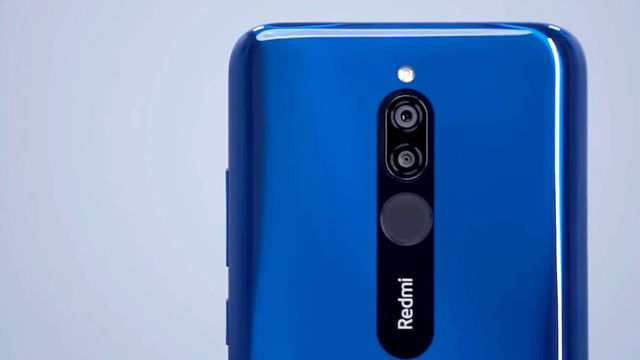 You should not expect high photos quality from a budget smartphone. However, Xiaomi Redmi 8 takes really good images in good lighting.

The main camera is represented by two sensors: the main one is 12-megapixel Sony IMX363 with artificial intelligence, f/1.8 aperture and a pixel size of 1.4 μm. The second sensor is 2MP with six lenses and Dual PDlkz technology for creating a blurred background effect. 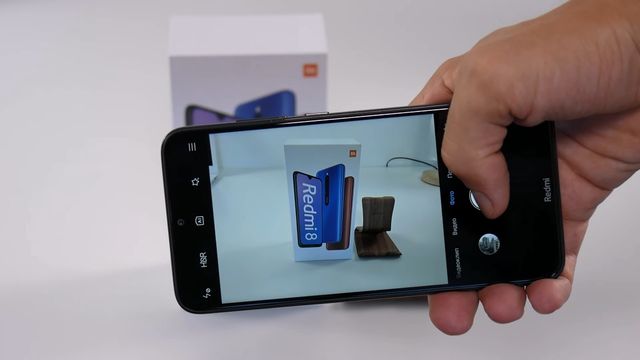 Xiaomi’s new smartphone is equipped with a smart frame rating function. Redmi 8 can recognize 33 scenes and choose the optimal settings for them. If you take pictures on Redmi 8 in good conditions, then you will get great pictures. 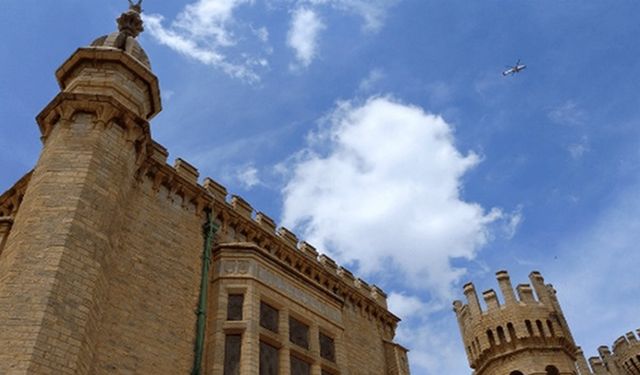 Front camera has 8MP sensor with AI. The sensor does its job well – it makes clear and vibrant selfies. For those who like to process photos, there are various modes and functions. 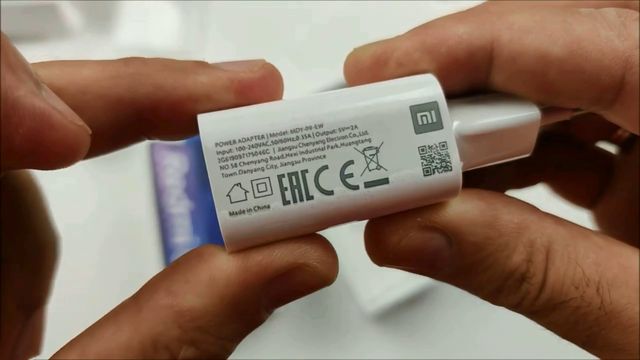 One of the main advantages of Redmi 8 is battery. Xiaomi new smartphone has 5000mAh battery. It is not only large, but also charges quickly: from 0% to 100% in just 2 hours.

The smartphone can last 2-3 days on a single charge. Of course, it depends on the load, but with average usage you can get 2 days. 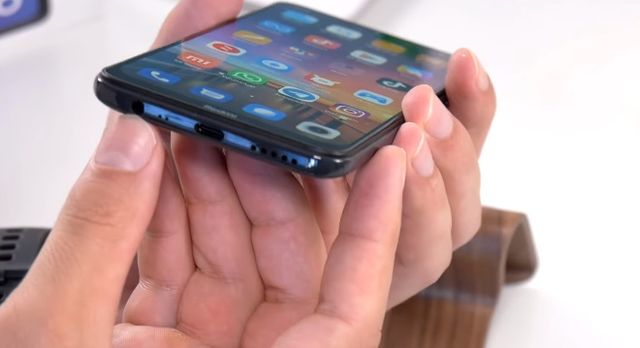 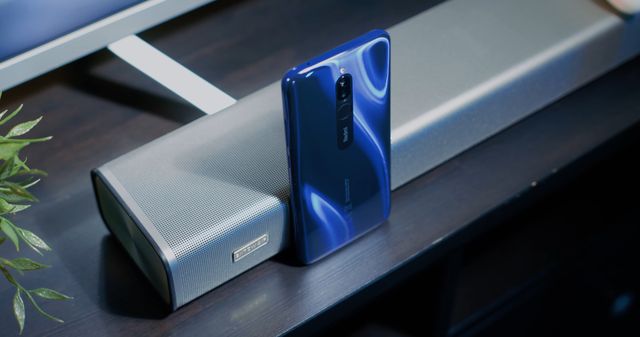 The smartphone was introduced in China in early October 2019. For several weeks it didn’t appear in Chinese stores. However, the other day Redmi 8 appeared, its price was slightly higher than officially announced – $150 for 3/32 GB version and $170 for 4/64 GB model. 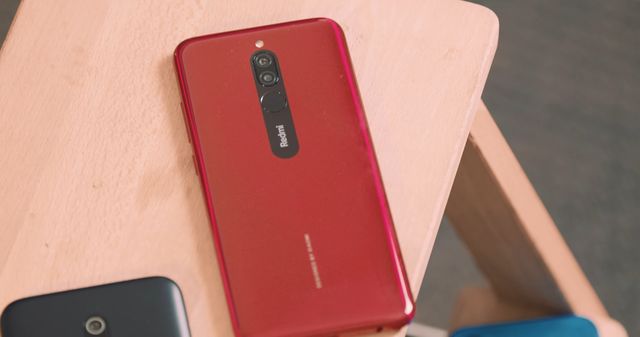 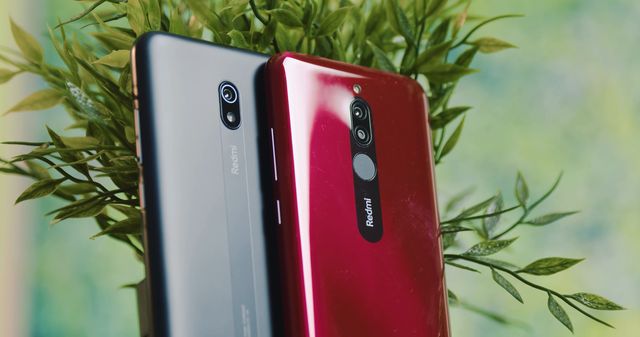 The main competitor of Redmi 8 is another Xiaomi smartphone – Redmi 7. It is really hard choice, because both of them have advantages. Which one is better: Redmi 8 vs Redmi 7? There is no obvious answer, but we will try to give several answers to this question.

First, the difference between Redmi 7 and Redmi 8 is not so great. The smartphones were released with a half-year break. In everyday use, you will not notice the difference. Therefore, it is more logical to buy a Redmi 7, because it is cheaper. 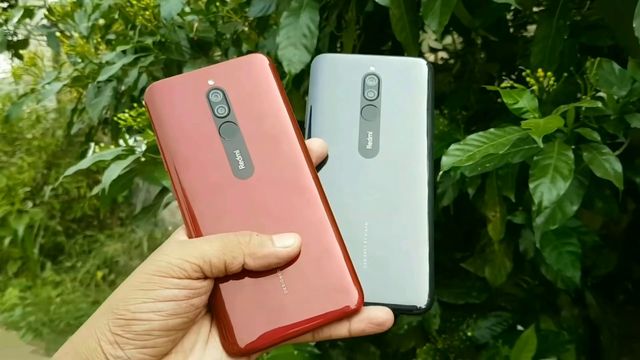 On the other hand, Redmi 8 is a new smartphone. The manufacturer will support it with updates longer. It has a slightly better camera, longer battery life and updated design. If you believe these arguments more, then you should add $25 and buy Xiaomi Redmi 8.