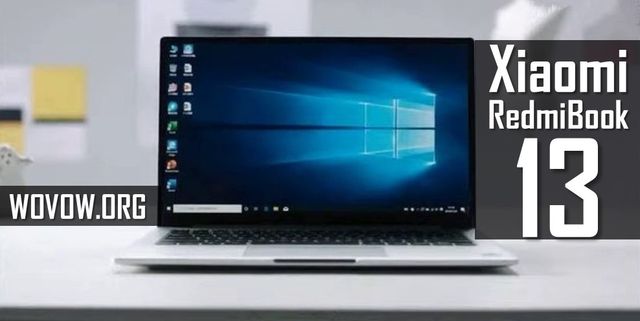 We will remind you that at the end of October Xiaomi already filled up RedmiBook series of laptops. These were RedmiBook 14 Enhanced Edition and RedmiBook 14 Ryzen Edition. The new Xiaomi RedmiBook 13 differs from previous versions by its more compact size and very thin bezels around the screen.

We should say that Xiaomi RedmiBook 13 will be available in three configurations with different processors and graphics card.

Let’s make the first review of the new Xiaomi laptop, and talk in details about specifications of all three configurations.

Regardless of memory, processor or graphics card, the design of Xiaomi RedmiBook 13 remains unchanged.

The main feature of the new notebook is its size – 32.3 x 22.8 x 1.7 cm. The company compares the size of new laptop with album sheet – it is so compact and convenient.

Certainly, it is the most compact laptop in RedmiBook series.

Despite the fact that laptop’s case is metal, the weight of is small – 1.5 kg. It makes RedmiBook 13 very convenient for everyday use not only at home, but also in cafés and public transport.

Thanks to its small size and weight, the laptop will not take much space in a bag or backpack.

From the name it is clear that Xiaomi RedmiBook 13 is equipped with 13.3-inch display. This is Full HD+ screen with resolution of 1920 x 1080 pixels. Unfortunately, this is a regular panel, not a touch panel.

A nice feature of the display is wide viewing angle of 178°.

As we wrote earlier, the bezels around the screen of Xiaomi RedmiBook 13 are very thin, especially the side bezels. The upper and lower bezels are slightly larger, but still quite thin.

The laptop doesn’t have web camera. Under the screen there is only RedmiBook logo.

By the way, thanks to thin bezels, the screen to the body ratio has increased up to 89%.

On the side edges you will find ports and connectors, but not too many. You can use two USB 3.1 connectors, one HDMI, a laptop charging port and a 3.5 mm headphone jack.

There are two 2W speakers on the bottom panel. They provide quite powerful sounding DTS.

However, we don’t really like the location of speakers. If you hold the laptop on your knees, for example, the sound will be quite bad.

On the bottom panel there are also holes for the cooling system. This is another important feature of the new laptop Xiaomi RedmiBook 13, but we will talk about it later.

The laptop is available in silver color with a black keyboard.

Now let’s talk about performance. As we said, Xiaomi RedmiBook 13 is available in three configurations.

The basic model of RedmiBook 13 laptop works on Intel Core i5 processor, but without a graphics card.

The top version of Xiaomi RedmiBook 13 is equipped with a powerful Intel Core i7 processor with the same GeForce MX250 graphics card.

Regardless of the processor and graphics card, the memory is the same – 8 GB of RAM and 512 GB of built-in memory.

As for the battery, the manufacturer promises up to 11 hours on a single charge.

The fast charging support is available. In just 35 minutes, Xiaomi RedmiBook 13 is charged up to 50%. Full charging of laptop takes just over 1 hour.

As we wrote earlier, RedmiBook 13 has an improved cooling system. The new cooling system consists of a large fan and a double heat pipe. Thanks to the system, the heat output has increased up to 70%.

By the way, despite the fact that the cooling system has been improved, the noise level has decreased, and the air intake has increased by 25% compared to previous models. Excellent result!

Another interesting feature of RedmiBook 13 is support of mutual data transfer between Xiaomi devices. Now you don’t need to use additional cables to transfer files from your laptop to your smartphone or from the laptop to another laptop. You just need to synchronize Xiaomi devices with each other wirelessly.

Let’s move on to the most interesting thing – the price. Of course, the price of Xiaomi RedmiBook 13 depends on configuration.

The basic version of Xiaomi RedmiBook 13 will cost you $600. The version with graphics card costs $640, and the most powerful model with Intel Core i7 processor is $739.

Now all three versions of Xiaomi RedmiBook 13 laptops are available for pre-order. Official deliveries will begin on December 12, i.e. the day after tomorrow.