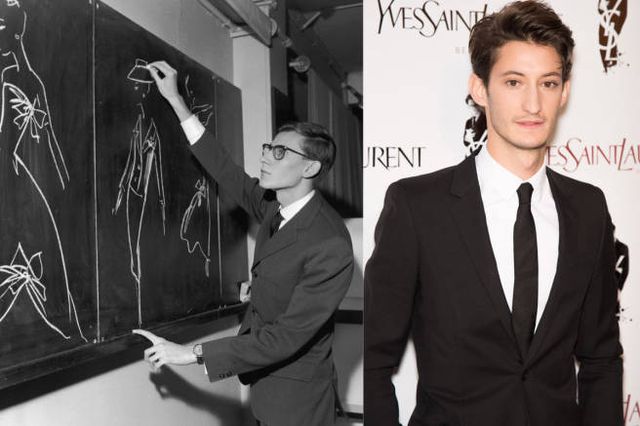 1962. After the death of Christian Dior, the young Yves Saint Laurent, called to replace him, opened his own fashion house staff. At his side his companion, friend and partner in life, Pierre Bergé who, now elderly, says dream, rise and fall of the man who has loved more than anyone else.

In the fashion industry is to be Yves Pierre structure and superstructure, or perhaps it would be more appropriate to say the opposite? This product evenly bio Lespert biopic, biostyle, Bioart is not possible to isolate the personalities of the lovers to derive the individual specificity, when a tie is l’amour fou.

The scan time has classically skeleton frame: the old Pierre Bergé (Guillaime Gallienne de la Comédie-Française) reminds his companion disappeared in flashbacks, emotion and regret. Through the filter we discover Bergé-Yves Saint Laurent ( Pierre Niney “de la Comédie-Française”) portrayed as a genius nervous, neurotic, neurasthenic, a child prodigy of fashion but unable to come up with a visit to the military.

Behind every great man is a great manager. Pierre, like an invisible Geppetto, deals with all the aspects that make it possible to Yves. It starts with a young twentysomething stylist in Paris, from climbing up to the house of Dior for human conflict and existential unrest in Algeria, where the family lives. Saint Laurent is helpless in front of the world, because the only thing he can do is to create clothes.

The protagonist is fashionable to natural character for a feverish mind that if you do not find peace by drawing and imagination with that breaks into an art founded with the aim of finding relief primordial phantoms of the mind. That’s genius is not an inscrutable mystery: Bergé, the subject, the lives and tells it as a unique and fragile object, such as YSL creations, all of which are focused the spotlight in a parable that binds the story to the disease while the star and the inspiration of Yves shine ever more dazzling.

The film is extremely visual and models of YSL are amazing, from the first attempts post-emancipation Dior to contamination with the art of Warhol, Mondrian, Matisse and exotic styles. Tormented and unresolved, Yves delves into fabrics in search of an identity and thus launches a new femininity with the trench coat, blazer, tuxedo feminine. Sophisticated and innovative, which was launched on the inevitable road dell’autodistuzione, Saint Laurent “inetichettabile” on the professional and social as well as in terms of gender.

The problems are the result of this work towards the model of narrative fiction and excessive didacticism; In this regard one might ask whether it is not perhaps the documentary the only possible way of telling a man so controversial track on the binomial genius & madness (L’amor fou 2010 is expressed in this language.)

The Algerian Lespert prefers to focus on the issues in the first part of the art in an absolute sense, and the relationship with politics, weapons, management of emotions and in the second on more and more predominant dark side of the designer. Model Victoire mob deep chords in Yves, not only as a personification of an ideal fashion, but also as a generator of jealousy and subject to the frontiers of the quasi-possible; The designer keeps homosexual but Victoire lights of the everyday fantasies of a world in which men think to dress women. The three actors are very good at building a sort of Jules et Jim shuffled cards, a film within a film where nothing is as it seems and not as it seems.

The film ultimately reveals the story of a man put in shape with unconventional ways sometimes too conventional. But the atmosphere is authentic, due largely to haute couture models present at the scene and the soundtrack. The size of the character, that charms and overwhelms the viewer arrives perfectly.