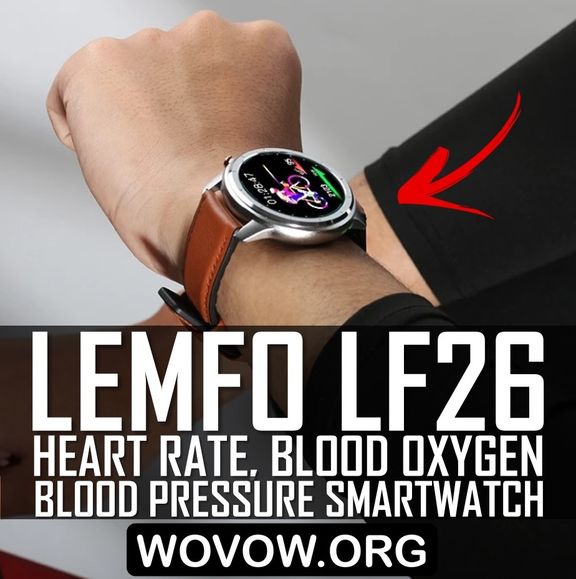 Another budget smartwatch from the Chinese manufacturer was announced. This time LEMFO has released the new smartwatch called LEMFO LF26. Perhaps, this is one of the most beautiful and stylish watch under $50.

By the way, yesterday I have posted the review of Zeblaze NEO 2. It costs about the same as LEMFO LF26. So, which smartwatch is better to buy? Let’s find out.

The new smartwatch from LEMFO looks very stylish, at least on official images. You can choose the model with black or white dial. The strap is available in black metal or white metal, as well as black leather and brown leather.

You can buy any of these straps additionally, and change them whenever you want. The dial of LEMFO LF26 is only 45mm, while the thickness is 10.8mm.

The smartwatch is water resistance by IP67 standard.

As you can see, there are two physical buttons on the right side, but you can use touch screen. Talking about screen, it has a diagonal of 1.3-inches and 360×360 pixels resolution.

By the way, don’t you think that LEMFO LF26 looks very similar to Amazfit GTR? They have similar physical buttons, metal case and leather straps. However, the smartwatch from LEMFO is almost 5 times cheaper than Amazfit GTR.

From other side, we cannot compare LEMFO LF26 with Amazfit GTR, because the smartwatch from Xiaomi has much more functions.

What Are Weather Display Watch Faces?

The other interesting feature of new LEMFO watch is weather display watch faces. The smartwatch automatically switch the dial according to weather of the day. I have never seen anything like this before! It is interesting to see how it works.

There are six sports modes, including swimming, running, cycling and others.

However, I cannot find music control function. This is a very useful feature, but it is not available on LEMFO LF26.

LEMFO new smartwatch is synchronized with smartphones via Bluetooth 5.0.

Although LEMFO LF26 has 150mAh battery, it lasts the same as Zeblaze NEO 2 with 180mAh battery – up to 7 days with active use.

At the beginning of this article, I promised to tell you which smartwatch is better to buy: LEMFO LF26 or Zeblaze NEO 2.

In my opinion, the smartwatch from LEMFO is better than Zeblaze NEO 2, because it has blood pressure and blood oxygen monitors. You can also use weather display watch faces and swimming sports mode.

However, LEMFO LF26 is about $8 more expensive than Zeblaze smartwatch. If the main benefits of LEMFO smartwatch are not important to you, then you can buy Zeblaze NEO 2. It has similar design, battery life and basic functions.