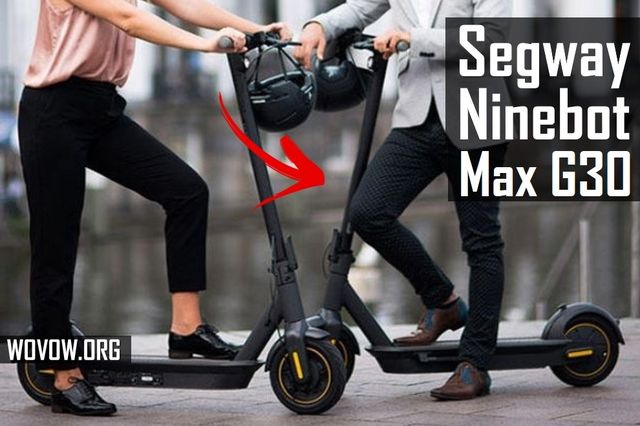 I’m sure you’ve heard of Segway brand, and maybe even have products from this company. Basically, the manufacturer produces electric transport such as bicycles, scooters, self-balancing scooters, mono wheels and even rollers.

By the way, on our website you can read reviews of some products from Segway. We have already written about Segway Ninebot MiniPRO 320 self balancing scooter and Segway Drift W1 rollers.

If you didn’t know, Segway is the owner of Ninebot company. Recently the manufacturer announced the release of its new electric scooter – Segway Ninebot MAX G30. The main feature of the new scooter is a large battery, thanks to which it is able to ride up to 65 km on a single charge.

The manufacturer says that Segway Ninebot MAX G30 has the highest mileage of any electric scooters in 2019. 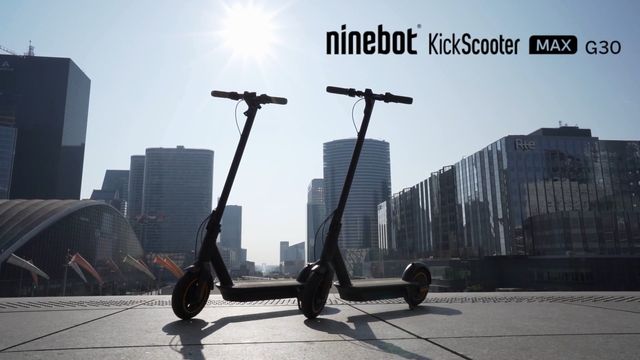 Other features of Segway Ninebot MAX G30 include a folding design, a powerful 350W motor, 10″ tires and a maximum speed of 25 km/h.

Let’s take a first look at Segway Ninebot MAX G30 and talk about its design, features, price and where to buy cheaper. 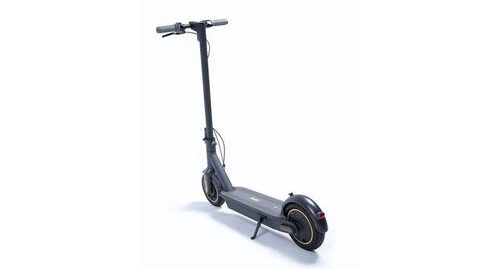 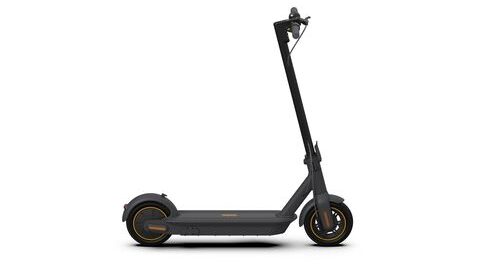 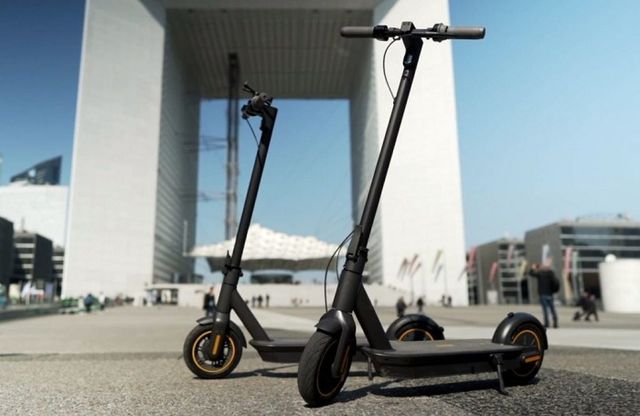 Segway Ninebot MAX G30 has received a familiar design for modern electric scooters. The manufacturer did not come up with anything new.

The scooter is made of black matte aluminium alloy with orange details. 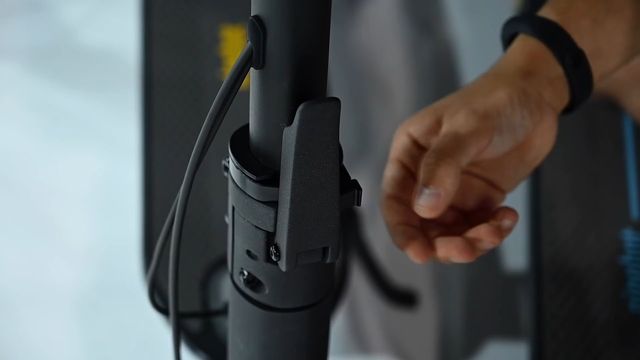 The folding design allows you to transport the scooter in the trunk of the car, as well as bring it to a cafe, elevator or even public transport. 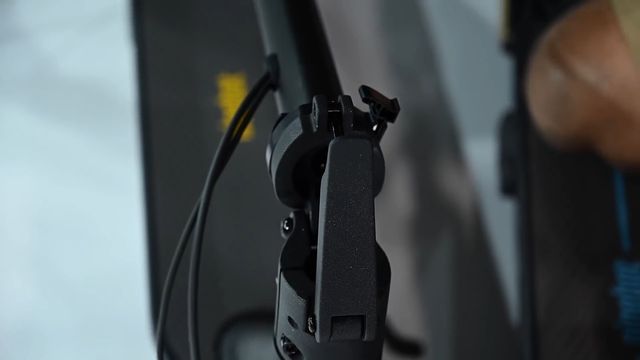 By the way, the weight of Segway Ninebot MAX G30 has increased in comparison with previous models. The new electric scooter weighs 19 kg.

Most likely, the big battery is the reason of the large weight. The manufacturer had to make the compromise to make the better mileage of electric scooter. 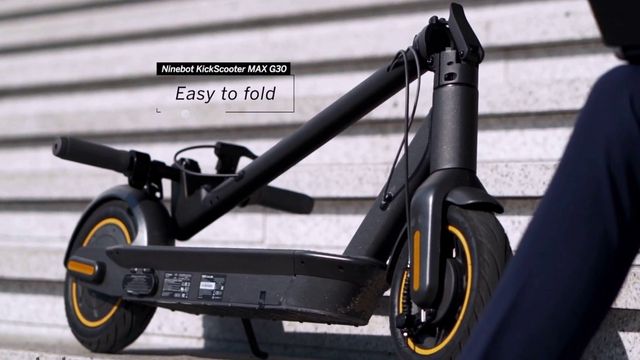 The wheels have also become bigger – now they are 10-inches each. We want to remind you that the previous electric scooter from Segway had 8-inch wheels.

Larger wheels allow you to ignore potholes and other irregularities on the road. 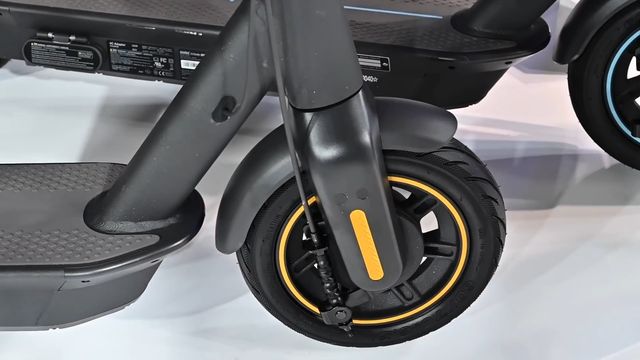 Under the front wheel is a large white LED flashlight. Another red light is located above the rear wheel. Both flashlights are powerful enough to illuminate the road. As you understand, the lights are necessary to ride an electric scooter in the dark or on poorly lit roads. 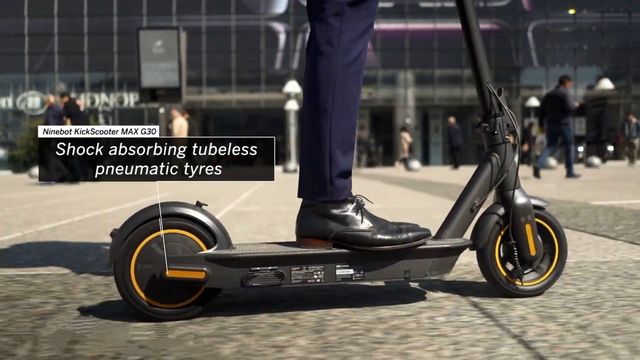 In addition, each wheel has reflectors on it. They reflect the light from the cars and street lights, making you more visible to other road users. 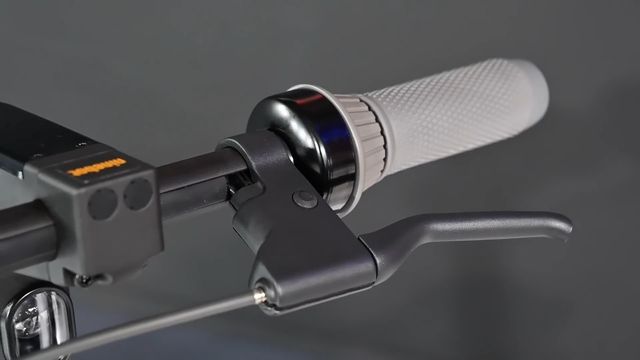 Now let’s look at the steering wheel. There is a brake lever on the left side and a yellow button on the right side to activate the front lights. 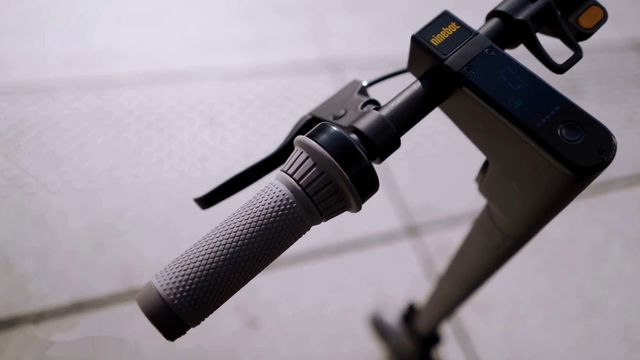 In the middle there is a small color LED display and a round button to power on the electric scooter. The display shows the time, distance, riding mode, speed, battery charge and connection to the smartphone via Bluetooth. 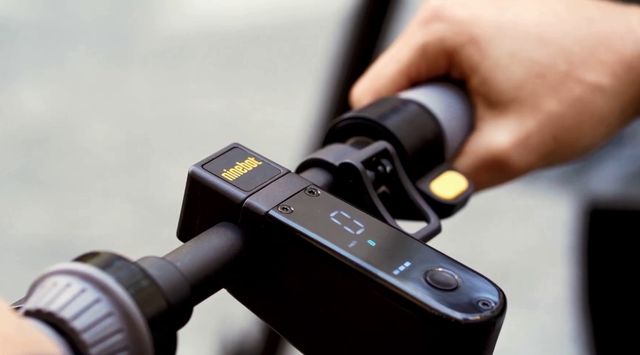 The LED display is really handy because you don’t have to constantly take out your smartphone from the pocket to check the battery level or change the riding mode. 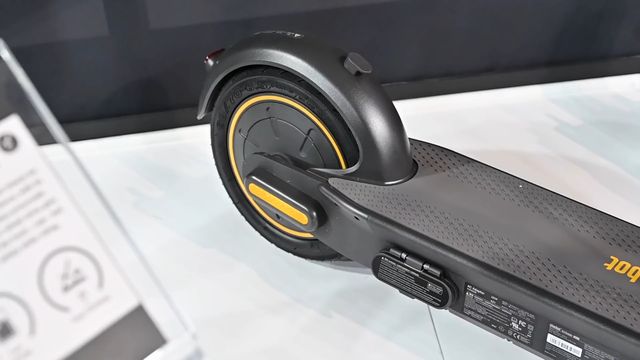 The foot platform is rubberized and has a volumetric design. This surface offers a good grip, so your legs don’t slip even when it’s raining. 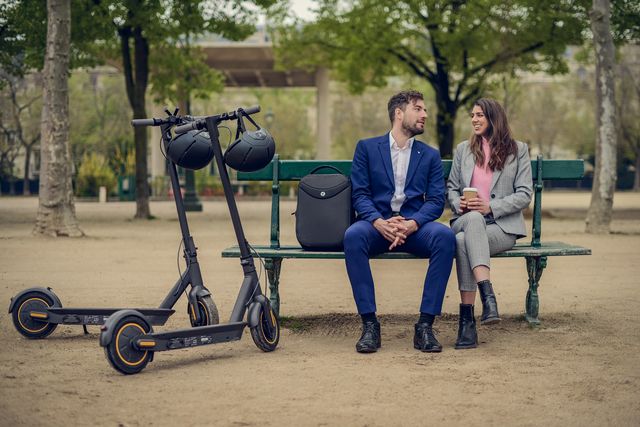 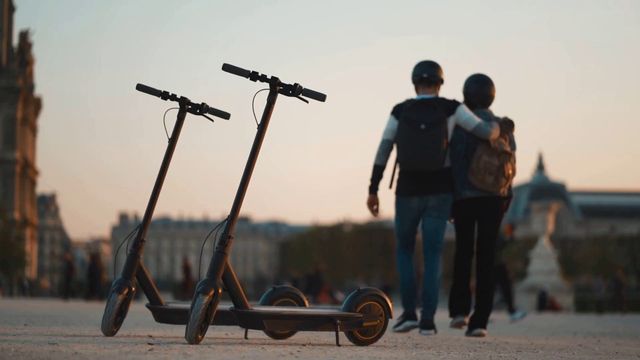 Now let’s talk about the features of the new Ninebot electric scooter.

Segway Ninebot MAX G30 is equipped with a fairly powerful 350W motor. It allows the scooter to climb a mountain at an angle of 20 degrees. 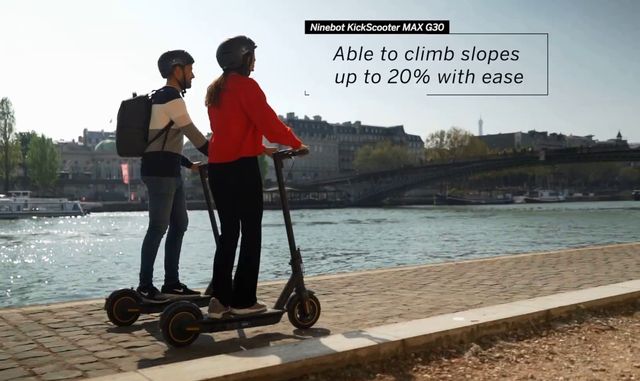 Segway Ninebot MAX G30 can reach a maximum speed of 25 km/h. This is more than enough to ride around the city or even out of town. 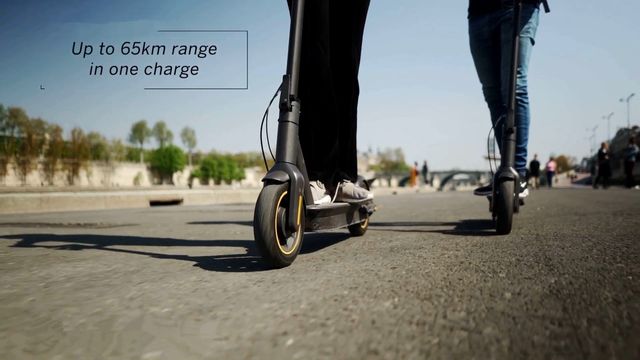 However, the main feature, as we have already written earlier, is the mileage. The new electric scooter can ride up to 65 km on one charge. This is more than twice as much as the previous models of electric scooters. Excellent! 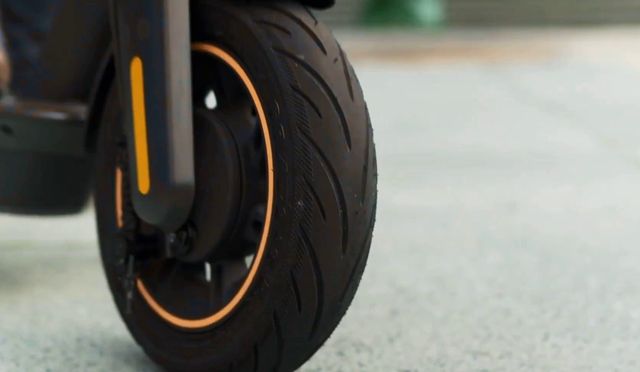 By the way, larger wheels and a powerful motor allow the scooter to ride not only on a flat asphalt, but also on a less convenient surface, for example, the ground. 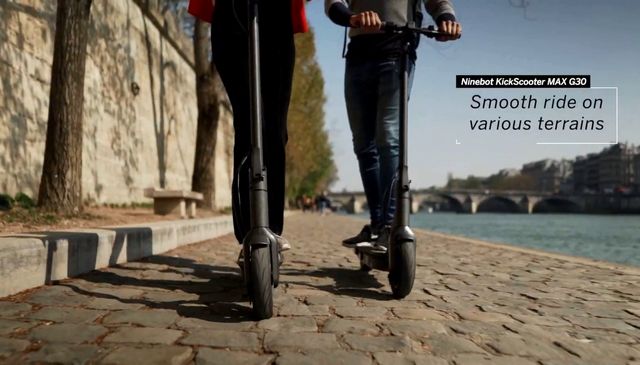 The new scooter from Ninebot has water protection according to IPX5 standard. This means you can ride Segway Ninebot MAX G30 in rainy or wet weather. The electric scooter is not afraid of puddles or even direct water jets. 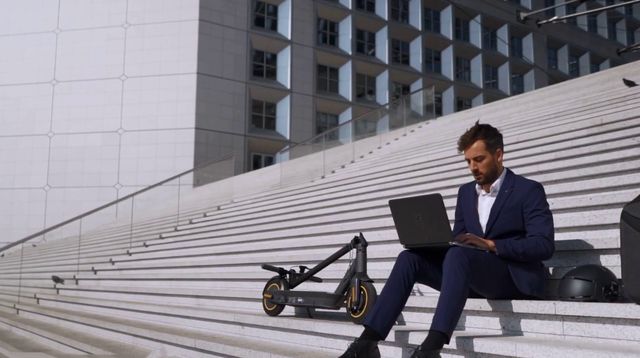 The maximum load of the scooter is 100 kg. The manufacturer says that Ninebot MAX G30 is intended for people aged 14 to 50 years.

Segway Ninebot MAX G30 has three modes of ride: energy-saving, standard and sports. The mode can be selected using the LED display on the steering wheel. The speed and mileage will depend on the mode you choose. 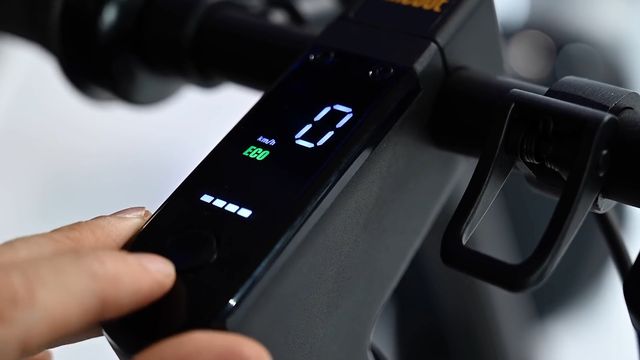 By the way, the app on smartphone allows you to set the lock on the scooter via 5-digit pin code. 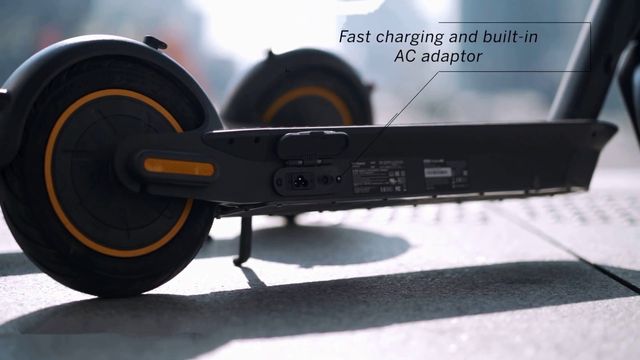 As you can see, the electric scooter has a high mileage because of the large battery. The battery capacity of Segway Ninebot MAX G30 is 15300mAh.

The scooter supports fast charging technology. It takes about 6 hours to fully charge the battery. 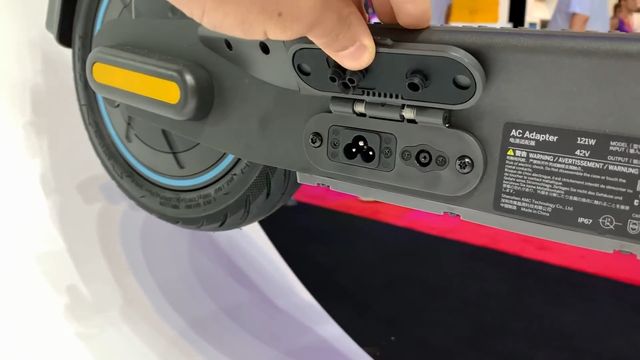 The charging connector is located on the right side of the electric scooter. Although, the connector is hidden under a special cover to prevent water or dirt from getting into it, but we think that this is not a good location. 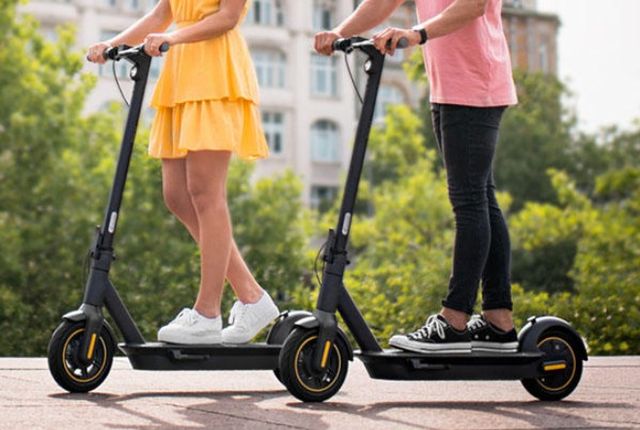 Finally, we would like to say that Segway is one of the best manufacturers in the market of electric scooters. The brand is associated with reliability and comfort. You won’t regret buying a Segway Ninebot MAX G30. 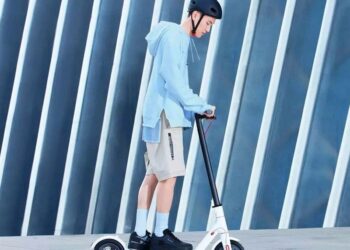 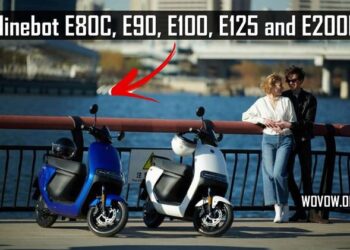 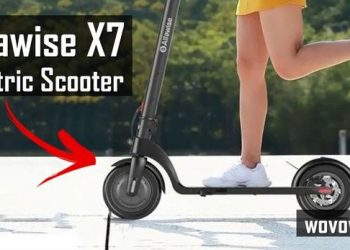